There were several wells and springs in the district. The main well, in Well Lane, used to be an open spring. Small girls, from Moss Street and Church Street, with babies in prams, used to bring water from the well to nearby houses.

Your can see it on the map below. 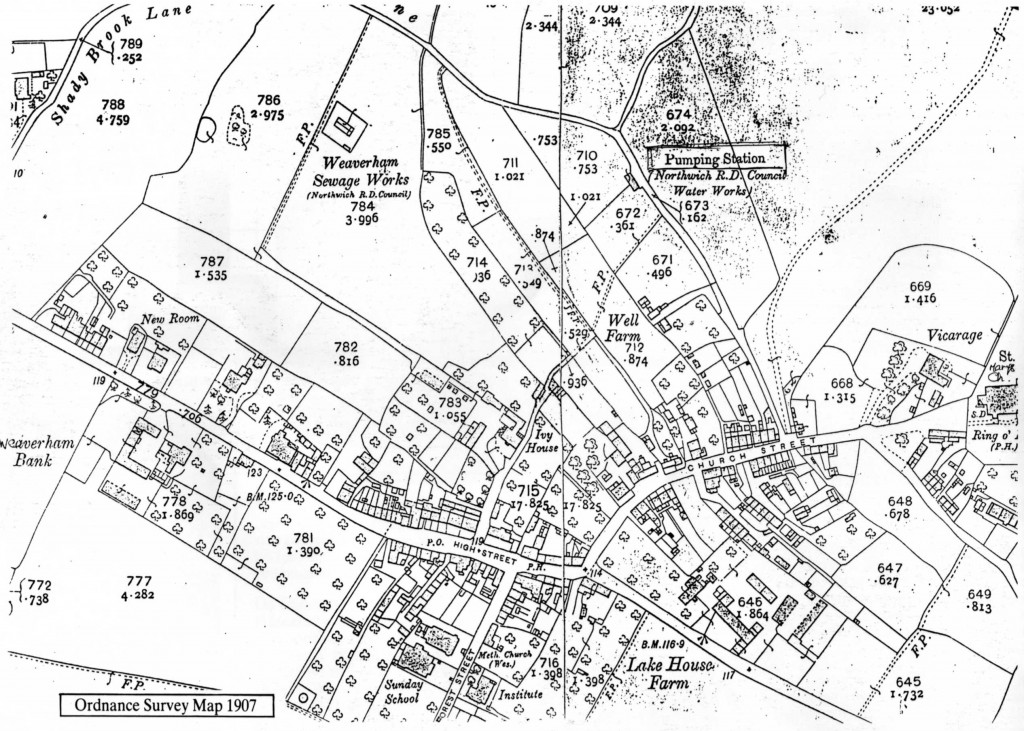 Eventually, a Pumping Station raised the water, via a pipe to a tower in Tower Lane. The pump was coal-fired and steam driven. Any overflow went through to a stone trough and flowed down Well Lane and Slutchy Lane through fields to the Weaver. The trough was uncovered when building a new housing estate some years ago. It is now in Acton Bridge

The Water Tower, according to Kelly’s Directory, “was erected in 1891 to supply the Townships of Weaverham and Acton with water from the works of Weaverham, the water being obtained from a deep well. The cost was approximately £2,600.” (1914) It was built of Staffordshire blue brick and was a cylindrical building. It failed to give a sufficient head and the water was condemned in 1936; the supply  was replaced by water sourced from Delamere – and, apart from times of drought, remained so  until relatively recently (about 2010/11, replaced by a supply from East of Manchester ). The Tower was demolished in 1962.

There were many water towers in the district at onetime. One was in Owley Wood and was built by ICI to provide water to their houses in that area (built around 1923). It was later used as an ICI maintenance store and has since been demolished.

Weaverham Well itself (Well Lane) used to be an open spring and was credited with healing powers. People travelled many miles to drink of its waters, which were supposed to cure rheumatism, sprains and swellings. Any popular visitor to Weaverham was taken to drink from it, as it was believed that anyone who did so would be certain to return to the village. Perhaps the village maidens took their sweethearts there before sending them off to the many wars to which Weaverham men have marched down the centuries.

A Weaverham lady, who saw it when it was last opened. describes it as “a pretty sight, with ferns growing between the sandstone blocks and the old steps worn by the feet of many generations. It was like a wheel with the well as the hub and the springs like spokes.” There was some difficulty in finding the exact site until an old villager remembered. At the previous opening, he had been forbidden by his mother to go and watch. He had disobeyed, gone home with muddy clothes and got a thrashing. After people stopped carrying water in buckets, the well was pumped for the use of the village.