Excerpts have been taken from the letter-bag of Lady Elizabeth Spencer-Stanhope, published in 1913.  Lady Elizabeth was the sister in law of the Rev Charles Spencer Stanhope, the vicar of Weaverham from 1835 to 1874.

On 27 September 1825 the Stockton and Darlington Railway, the first to carry passengers as well as goods, was opened amid unparalleled excitement.  The passengers journeyed successfully from one town to the other at the rate of 4 to 6 miles an hour, preceded by a man on horseback carrying a flag.

The prejudice by some people against the new mode of travelling, however, died hard.  For a long time many of the old county families, even while consenting to send their servants and luggage by rail, continued personally to drive in old-fashioned state along the country roads in their chariots-and-four.  The Duke of Wellington never entered a railway carriage till 1843, when he was forced to do so when in attendance upon Queen Victoria, who only the year previously had begun to make use of the train service.

Initially many of the gentry would travel on the train sitting in their landaus or barouches which were lashed securely on to a train truck.  The owners could enjoy the comfort and privacy of the old mode of transport combined with the swiftness of the new.   Unfortunately, travelling in this way was not as safe as first thought. 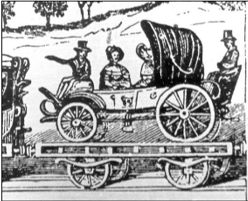 Early days when the gentry preferred to travel sitting in their personal carriages.

Friends of the Reverend Stanhope’s family were travelling in this manner when their carriage began to swing ominously, and to their horror they realised that the cords which attached it to the truck were becoming loose.  They immediately rang the communication bell in order to stop the train, but no attention was paid to their summons.  Again they rang and yet again, but with the same result.  On sped the train; indeed, so far from diminishing, its speed increased, and each moment the danger which threatened them became more imminent.  As the cords grew more slack, their carriage swung more violently from side to side, so that they momentarily expected to be dashed to pieces.  At last, however, the prolonged nightmare ended.  They reached a station, the train stopped, and they proceeded indignantly to interview the driver.  “I heard your bell,” the man replied, “and I knew your danger, but I could not act other than I did.  The express was upon us and I was racing it.  It was your lives against the lives of everybody in the train.” 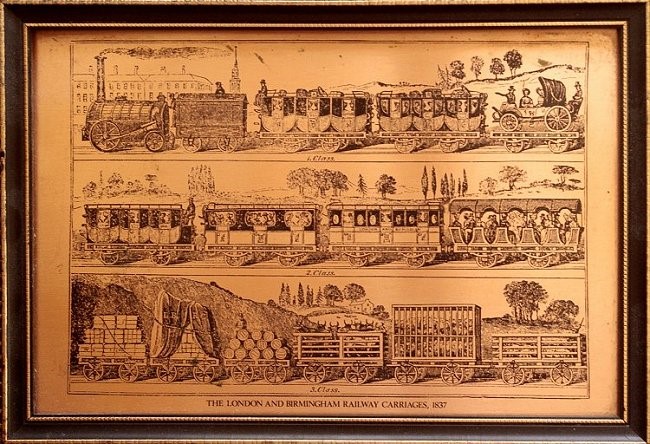 This incident, following on some other narrow escapes from a similar catastrophe, decided the authorities to prohibit this mode of travelling and for the future private carriages journeyed apart from their owners.

In 1838 the Lady Elizabeth Spencer Stanhope was staying with her husband’s brother, the Reverend Charles Spencer Stanhope, the Vicar of Weaverham.  They were to visit Liverpool and Charles wished initially to use one of the steam barges down the Weaver at 6 o’clock in the morning but she preferred to travel by train for the sightseeing.  She describes in her letters the novel experiences of the delightful society she met on the train to Liverpool.

“It certainly was a new insight into life and to be looked on as a wholesome dose of democracy.

The carriage was of the half-open description, with benches, and held 36 individuals, chiefly Navvies.  There was one select party of 12 who all rushed in together with their pickaxes and various implements, and the noise they made was rather marvellous, and plenty of scuffling.  The only chance was to appear as if one was used to it, though it was certainly not pleasant when we were in the depths of that endless tunnel to hear them skirmishing together and making every sort of uproar.  I expected them to come tumbling over the benches upon us, and the conversation was not profitable, though as long as there was no fighting we had to find it tolerable.”

Train travel has always been able to provide a rich supply of new experiences.