Rifleman John James Gerrard, who is commemorated on the Weaverham War Memorial, was in the 1/5th South Lancashire regiment who were billeted near Ypres and who took part in the attack on Weiltje at 3:50 a.m. on the 31st July 1917.

This was he start of the Third Battle of Ypres – which is also known as the the Battle of Passchendaele. The battle to was last for a further 103 days and cost 275,000 British and 220,000 German lives.

Rifleman Gerrard was killed on the first day of the battle, though we do not know the circumstances of his death – the official regimental “War Diaries” rarely mention “Other Ranks” by name.

The object for the 1/5th South Lancashires was to take Capricorn Trench and support line and consolidate on the black line on map 3.

This was to be followed by the 1/10th Liverpool Scottish Regiment occupying Canvas and Capital trenches and consolidating on the green dotted line ( top right of map ). 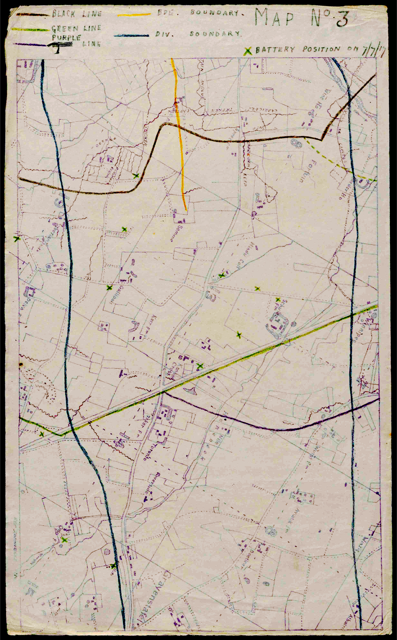 The battalion War Diary of the 1/5th Battalion, South Lancashire Regiment reports that they were moved from rest billets near Setques and Esquerdes to Ypres and L.4 and Goldfish Chateau on the 20th of July.

A & C companies were moved to billets in L.4 on the 21st July. Enemy sent gas shells into and heavily shelled YPRES.

On the 30th July the companies were moved to assembly positions prior to the attack on the 31st July.

31st July 1917
WIELTJE
3:50 a.m. Attack launched. Battalion was on the right of the Brigade front with the LIVERPOOL SCOTTISH on its left. Objective, the BLACK LINE. When the men formed up in artillery formation, outside it was very dark and difficult to get the proper direction. This was made much more difficult by the fact that the Battalion on the right advanced half right across our front. There was very little hostile shell fire to interfere with the advances. After crossing the BLUE LINE and getting extended, the sections got somewhat mixed but Leaders down to Section Commanders showed bravery and skill and reorganised sections as they advanced. After leaving the BLUE LINE, machine gun fire became more and more severe. the enemy had marked spots on which to concentrate such as crossing the STEENBEEK and gaps in hedges which were everywhere well wired.

The advance was made from shell hole to shell hole by sectional rushes. Support fire was given by Rifles and Lewis Guns until within about 200 yards of the OBJECTIVE when machine gun fire from SPREE FARM and CAPRICORN TRENCH to North of SPREE FARM held our men up. We had the help of two tanks, one of which crushed down the wire in front of CAPRICORN and then dealt with the trench itself and the other went past SPREE FARM and up to POND FARM, silenced the M.G. and enabled the men to reach and take the trench which by that time was empty except for men who were taken in dugouts.

Consolidation was immediately begun but owing to enemy aircraft flying low over the trench giving the position away, it was impossible to carry out the strong point where intended. Lewis Guns were sent forward into CAPRICORN SUPPORT on either side of the road, our trench was established on both flanks.

Casualties – 2/Lieut S H FIELD was killed whilst leading his platoon. 2/Lieuts SILCOCK, H F FALLAN, S H LOD, R G PULLEN, S W BAMBER were wounded during the attack. 2/Lieut J BEACH is missing and believed to be killed. At midnight our casualties were 1 officer 27 OR killed, 5 officers 133 OR wounded, 1 officer 11 OR missing. But the day had gone well, all objectives secured.

I cannot help but think that the day did not go so well for 27 year old Rifleman John James Gerrard, son of William and Martha A. Gerrard of Cuddington.

The next day, the 1st of August,  the diary reports “Rain fell heavily throughout the night.”. On the 4th the diary notes “Tents and all ground pretty wet.” This was start of deteriorating weather conditions that turned the undrained  ground into a sea of cratered and churned mud.